Fitness Trade-offs Result in the Illusion of Social Success 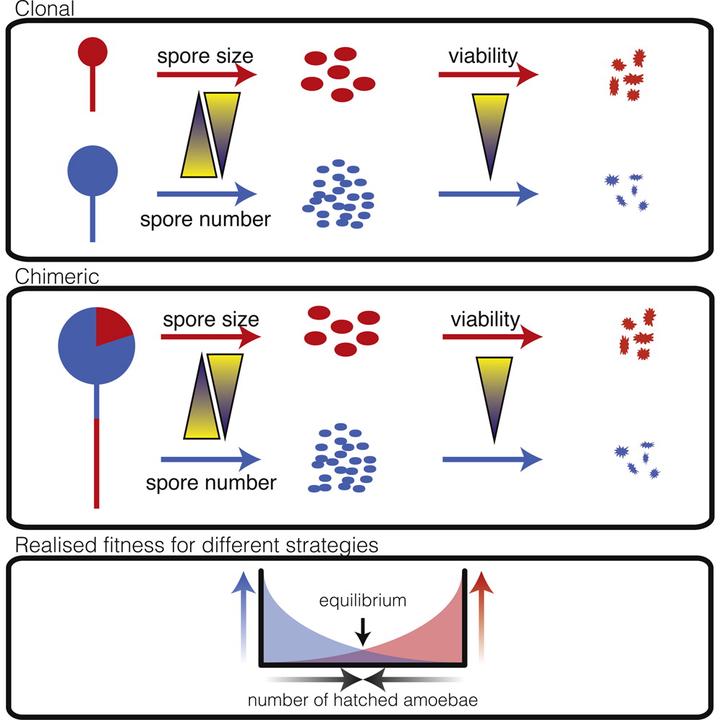 Cooperation is ubiquitous across the tree of life, from simple microbes to the complex social systems of animals. Individuals cooperate by engaging in costly behaviors that can be exploited by other individuals who benefit by avoiding these associated costs. Thus, if successful exploitation of social partners during cooperative interactions increases relative fitness, then we expect selection to lead to the emergence of a single optimal winning strategy in which individuals maximize their gain from cooperation while minimizing their associated costs. Such social “cheating” appears to be widespread in nature, including in several microbial systems, but despite the fitness advantages favoring social cheating, populations tend to harbor significant variation in social success rather than a single optimal winning strategy. Using the social amoeba Dictyostelium discoideum, we provide a possible explanation for the coexistence of such variation. We find that genotypes typically designated as “cheaters” because they produce a disproportionate number of spores in chimeric fruiting bodies do not actually gain higher fitness as a result of this apparent advantage because they produce smaller, less viable spores than putative “losers.” As a consequence of this trade-off between spore number and viability, genotypes with different spore production strategies, which give the appearance of differential social success, ultimately have similar realized fitness. These findings highlight the limitations of using single fitness proxies in evolutionary studies and suggest that interpreting social trait variation in terms of strategies like cheating or cooperating may be misleading unless these behaviors are considered in the context of the true multidimensional nature of fitness.