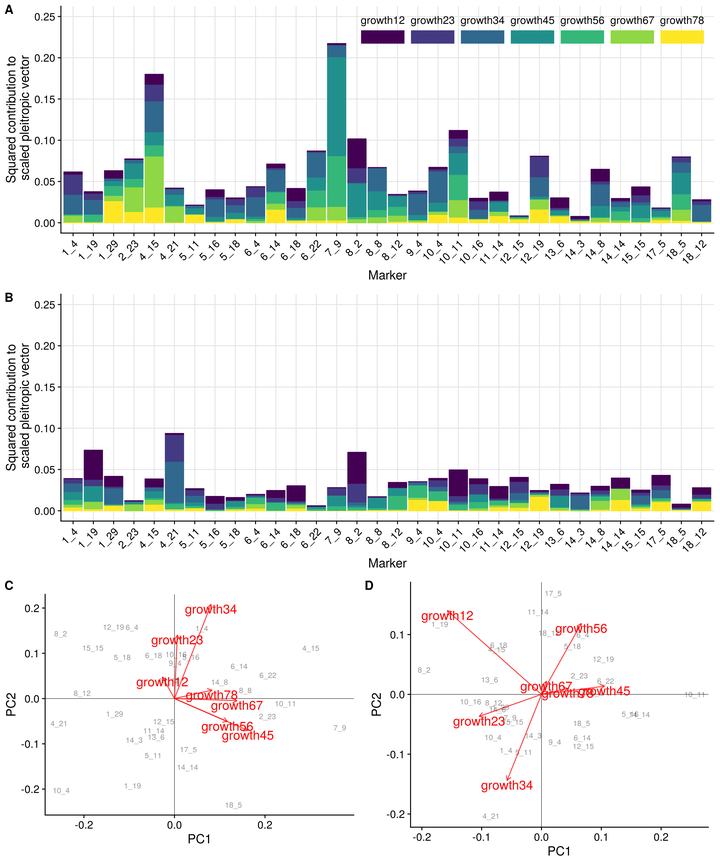 Multivariate quantitative genetics provides a powerful framework for understanding patterns and processes of phenotypic evolution. Quantitative genetics parameters, like trait heritability or the G-matrix for sets of traits, can be used to predict evolutionary response or to understand the evolutionary history of a population. These population-level approaches have proven to be extremely successful, but the underlying genetics of multivariate variation and evolutionary change typically remain a black box. Establishing a deeper empirical understanding of how individual genetic effects lead to genetic (co)variation is then crucial to our understanding of the evolutionary process. To delve into this black box, we exploit an experimental population of mice composed from lineages derived by artificial selection. We develop an approach to estimate the multivariate effect of loci and characterize these vectors of effects in terms of their magnitude and alignment with the direction of evolutionary divergence. Using these estimates, we reconstruct the traits in the ancestral populations and quantify how much of the divergence is due to genetic effects. Finally, we also use these vectors to decompose patterns of genetic covariation and examine the relationship between these components and the corresponding distribution of pleiotropic effects. We find that additive effects are much larger than dominance effects and are more closely aligned with the direction of selection and divergence, with larger effects being more aligned than smaller effects. Pleiotropic effects are highly variable but are, on average, modular. These results are consistent with pleiotropy being partly shaped by selection while reflecting underlying developmental constraints.